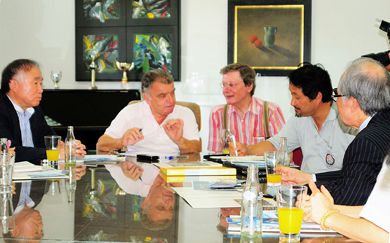 Water, as symbol of the Delphic Games is of equal importance as the fire for the Olympic Games. With a ceremony of the water fetching at the Kastalian Spring, the III Delphic Games 2009 were initiated weeks prior to the Games and its official Opening Ceremony in Jeju, Korea. Members of the OrgCom 2009 met the mayor of Delphi, Panagiotis KALTSIS, to prepare the ritual. From left: Jong-Duck LEE, Chairperson of the OrgCom 2009; Panagiotis KALTSIS; J. Christian B. KIRSCH, IDC Secretary General; Sang Kyun CHOI, Assistant to the IDC Secretary General; Sang Man LYI, Member of OrgCom 2009